Happy Sunday, everyone! (Or Monday, for those of you further east, in which case, sweet dreams.)

Hope it’s been a lovely one so far. I finished a book today and I thought I would share with you the review I posted on Goodreads. Feel free to find me there! Cara’s Goodreads

Three things highly untypical of me:
1) Spending the better portion of the afternoon in bed reading a book. (I prefer reading at night.)
2) Suddenly being possessed by the urge for a cup of good tea. (I am a coffee drinker, like religion.)
3) Losing myself in a book.
END_OF_DOCUMENT_TOKEN_TO_BE_REPLACED

I’ve already shared this ceremonious news on both Facebook and Twitter, but some of you I know strictly through the bloggosphere. And so, without further ado, may I present to you the face of my second book, much as funny loves a laugh. 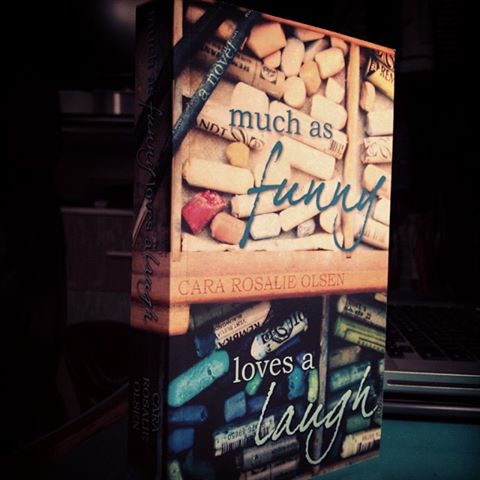 It’s Valentine’s Day. Raegan Delaney Morrison is eagerly preparing to give her ten year-old heart away in the form of pink and red construction paper, Elmer’s glue, and a sequin for every thought she’s ever had about Christopher; he is the boy next door, and he’s been Raegan’s best friend since they were old enough to grab sand and make a meal of it.

With confidence, Raegan declares her love, certain Christopher must feel what she feels: tingles in his toes, butterflies in his stomach, and this magnificent all over sickness that sort of feels like the flu. And Raegan knows that once their ardency is out in the open, the sooner they can get to the good stuff: holding hands at school, sharing pudding, discussing who they’ll invite to their zoo-themed wedding . . . there’s only one small problem.

When does anything in life ever go according to plan?

A bewildered Raegan is left to confront the first of—what will inevitably be many—life’s cruelties. But perhaps not all on her own.

When Raegan meets Sue for the first time, she doesn’t comprehend the rarity sitting before her, disguised in dirty flesh and bones; all she knows for certain is there is something very different about Sue. What appears to be written and resolute to minds awakened by judgment, remains clean and potential to a child’s uncluttered eyes. Raegan is drawn to Sue; into her world without walls.

I am incredibly honored to have been asked to participate in this month’s Author Special Feature. Debdatta, from Book Reviews by DDS has kindly selected my book to highlight during the month of September. There at her site, you may also enter to win Awakening Foster Kelly in the Giveaway, and learn a little more about the characters.

I hope you’ll stop by and say hello!
~ C

To celebrate the hullabaloo and vast amount of great things happening during September with Awakening Foster Kelly, for the entire month my book will be available for purchase on the Nook, iPad, and Kindle for $3.99!